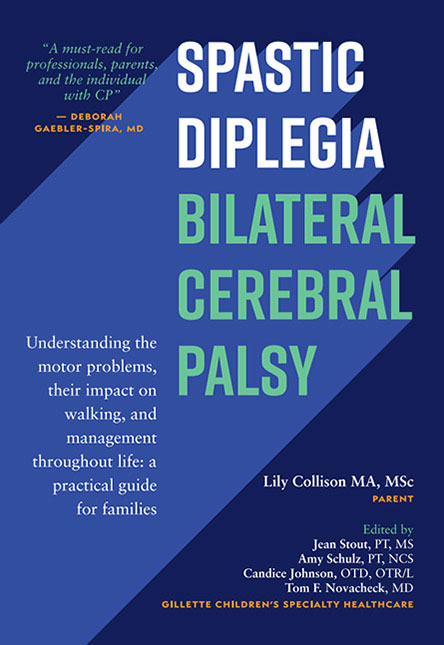 All proceeds go to CP research

This book provides the answers we have all been looking for … the perfect balance of science and practical knowledge …With a resource of this quality, the future is bright for all of us.

This co-developed parent–professional book on the focused topic of spastic diplegia is a must-read for professionals, parents, and the individual with cerebral palsy (CP). The range of the book is “real-world focused” with the latest accurate literature incorporated … It serves a unique educational niche … I am recommending it already!
Dr. Deborah Gaebler-Spira

This book is excellent, insightful, and educational: it will open minds and touch hearts. It is very clear and easy to read. As an adult with spastic diplegia, I have learned many new things about my condition from reading it.
Samantha Marie Lademann

This book provides a comprehensive overview of all aspects of living with bilateral spastic CP …The combination of evidence-based information and personal experience ensures that this book is an engaging and thought-provoking read, which families and health professionals would benefit from owning.
Dr. Jennifer Ryan

I met Lily Collison for the first time in mid-September 2001, when I was lecturing at a cerebral palsy seminar held at the Central Remedial Clinic in Dublin, Ireland. Lily later brought Tommy to Gillette … for treatment. That began a doctor-patient relationship that lasted up until my retirement in 2008, and a friendship that has lasted to this present day. Lily wrote a book for parents, much as I did for orthopedic surgeons back in 1991. This book, Spastic Diplegia—Bilateral Cerebral Palsy … is a must-read for parents of children with spastic diplegia, and if its guiding principles are followed, it will do much to ensure that their particular child reaches maturity with an optimal outcome.

Lily Collison and the staff at Gillette have taken a very complex disorder— spastic diplegia—and made it comprehensible to the lay reader. CP is a disorder that many clinicians do not fully understand either. As a pediatric orthopedic surgeon who specializes in the care of children and adults with CP, as well as being the father of a 37-year-old man who has CP, I highly recommend this book to people who have CP, parents, family members, and medical professionals. It is a fantastic overview of the subject with many insightful passages by those who have taken the journey.

This book is beautifully balanced—from references and information, to the heart of a mom lighting the way for other parents struggling to filter an overload of information … I would have loved to have had this book at the time of our son’s diagnosis, and would recommend any family members to also read it for a much deeper understanding of CP and how to help the family and child with CP … What a gift you have written.

Parent of an eight-year-old with spastic diplegia, Minnesota, USA

Health care is at its best when the patient is at the heart of health services. One of the fundamental components in this process of patient participation is sufficient knowledge about the disease and its treatments. This will allow good communication and making informed choices about treatment. This book provides that knowledge … For patients with spastic diplegic CP and their families this book provides a perfect start to become equal partners in their health care decisions.

This book is a valuable addition to the CP literature … A particular strength of the book is the road map that is outlined as the child with CP grows from infancy to adulthood … The addition of reliable and user-friendly web links is very helpful for the reader.

This is a wonderful resource for people with spastic diplegia and their families, which draws robust scientific information together in a clear and accessible way … Teamwork between health professionals, the person with CP, and their family is essential to achieve the best management plan …This book supports the voice of the person and parents in the team, empowering shared decision-making… a must-read for people with CP, families, health professionals, and students alike.

I needed this book when my son was born almost 15 years ago and didn’t meet his developmental milestones … I needed it when I was conducting my own research without the skill set on what intervention he needed when he was seven years old. I need it now as he ages and has growth spurts and we are researching orthopedic procedures. I will need it when he becomes an adult and lives independently.

Although we are in a low-resource setting, the team working with children and families … strives to provide the best care possible. Much of what has been described in this book is not yet available here, but the desire to improve options for care is honest and committed. This book, although written for families, has the potential to have a great impact on health care professionals and other stakeholders who have the ability to work on improvements at a more global level.

Thank you, Lily, for providing such an accessible resource for so many people, the person with spastic diplegia, their parents and families, medical professionals, and education professionals like me who prepare teachers to work with children with CP. I will certainly be using it to inform my practice with my students. This book should be on so many people’s reading list!

As a personal trainer who has multiple clients with physical challenges and CP, this book brought a whole new level of insight into what my clients have experienced … Rich in encouragement, scientific knowledge, practical advice, and personal stories, it will deepen your empathy and drive to achieve fitness for clients with physical disabilities.

A must-read for anyone working with young athletes with CP. This masterfully written book weaves together a wonderful spirit of optimism with practical tools for parents, educators, coaches, and medical professionals. As we look to grow the Paralympic movement in the United States, Lily’s work is critical to elevating the level of development programs available to young Paralympic hopefuls.

This is a unique book which gives an excellent insight into and holistic understanding of … spastic diplegia … from birth to adulthood …This book will assist any parent or relative of a child … or indeed a young person themselves in understanding their condition … and, most importantly, what they themselves can do to influence outcome … This book should also be read by all professionals working with persons impacted by disability and specifically CP.

This book … is a fantastic resource for parents and professionals alike … I wish that an equivalent book might soon be written for hemiplegia.

Parent of an eight-year-old with hemiplegia, Ireland

I compliment the author of this amazing “sat nav” for parents, siblings, families, carers, and teachers who may be setting out on a care journey of a young person with … spastic diplegia … I don’t think there is anyone who wouldn’t benefit from reading this book.

Teacher of children aged four to 13, whose sister has a disability, Ireland

When someone important to us is living with a long-term health condition, we often want to know what we can do to help. However, locating accurate, easy-to-understand information, specific to our needs, is not always easy. Parents and caregivers of children living with spastic diplegia will find this book provides them with such information.